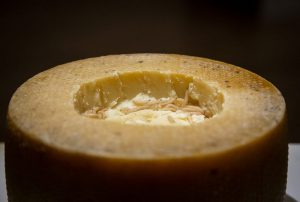 The Sardinia ancient culinary tradition holds the secrets of many delicious preparations, however, there is one that arouses more curiosity than the others: ‘casu marzu‘, the cheese with maggots. The name literally translates from the Sardinian language to ‘rotten cheese‘, and it is indeed a sheep milk cheese, Sardinian pecorino, the decomposition of which is brought about by the digestive action of the larvae of the cheese fly.

The females of the cheese fly lay their eggs in the crust and, when they hatch, the larvae eat through the wheel digging tunnels. The maggots’ digestive process breaks down the cheese’s fat and turns it into a very soft cream with a strong, and spicy flavor. Because of its peculiar flavor, the ‘casu marzu’ is difficult to combine with other dishes, and the best way to enjoy it is accompanied by a slice of good traditional carasau bread and a glass of red wine, such as Cannonau. 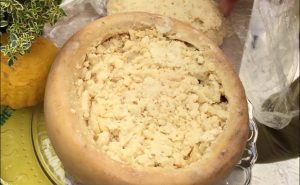 By the time the ‘casu marzu‘ is ready to be consumed, it contains thousands of maggots, and they must be alive for Sardinians to consider it safe. This, as well as the production process, however, represent a problem according to the European Union food hygiene-health regulations which prohibit its production and sale. To safeguard this culinary tradition, in 2004 the Ministry of Agricultural, Food, and Forestry Policies listed it as ‘Traditional Italian agricultural and food products‘; subsequently, it was requested that the European Union give ‘casu marzu’ the DOP (Protected Designation of Origin) status.